Tommy Mitchell was enjoying an active life as a young father to his baby girl, Emery, and his wife Brittany, when he was dealt the hardest news of his life: he was diagnosed with Stage 4 colon cancer at the age of 31 in May of 2014. Tommy’s cancer had already spread from his colon to his liver.

They had little time to let the news settle and for the next year, Tommy and Brittany gathered every bit of courage and faith they could muster and fought the fight for his life. Life as they knew it had forever changed. Not one moment was taken for granted. Careers were put on hold. Plans to grow their family became distant dreams.

Their faith was put to the fire, but they clung to it and both used the cancer to spread the good news of the Lord to many through their story. Tommy faced two major surgeries in June and November of 2014 and two rounds of intense chemotherapy. But God brought them through the storm, just as they believed He would.

In May 2015, Tommy got the news everyone had been praying for: he was cancer-free! And several months later, the Mitchells were handed another miracle: Emery would soon be a BIG SISTER!!! 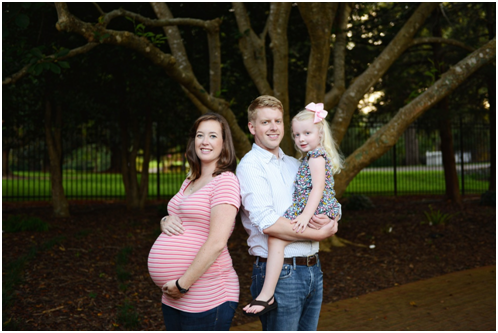 It seemed as if everything was behind them and they were getting back to the life they had put on hold.

Because of the nature of his cancer, doctors will monitor Tommy closely for the rest of his life and regular scans, every 3 months, will be his reality. In March, a PET scan revealed the worst – his cancer was back. After another liver surgery and radiation treatments to his lungs, Tommy was again considered to be cancer free.

Cancer carries SO many stresses and worries, and a great financial burden is one of them.

The family is still working to pay down the debt that amassed from Tommy’s first round of treatments and surgeries and are now getting the next wave of bills from the recurrence, all before Tommy even had a chance to return to work. This year will be especially challenging as Brittany recently delivered their new son in September.

Your donation would help cover the mounting medical debt the Mitchell’s have. Because Tommy must have a scan every 3 months for the foreseeable future, medical debt is a part of their reality even with insurance.

Update: As of October 12, 2016, Tommy is facing another recurrence of the cancer in his liver. He begins treatment again in November.

Will you please join us in praying boldly for Tommy, Brittany, Emery, and baby Tobias and stand with them in this fight?